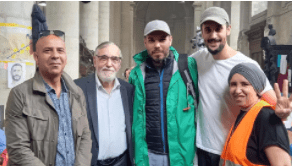 As part of International Day against Islamophobia on December 12th

Like all citizens deeply attached to justice and humanity, we have been stunned and appalled at the mass slaughters that hit Paris on November 13th and whose ensuing shockwave crossed French borders.

Emotion must not favor discriminatory measures against an « enemy » that has been designated since 2001 and the so-called « clash of civilizations ».