Netanyahu’s coalition is determined to boycott the Joint Arab List. Ironically, this is the same coalition that has been outspoken against the adoption of the boycott strategy as a legitimate non-violent political tool to struggle against Israel’s subjugation of the Palestinian people 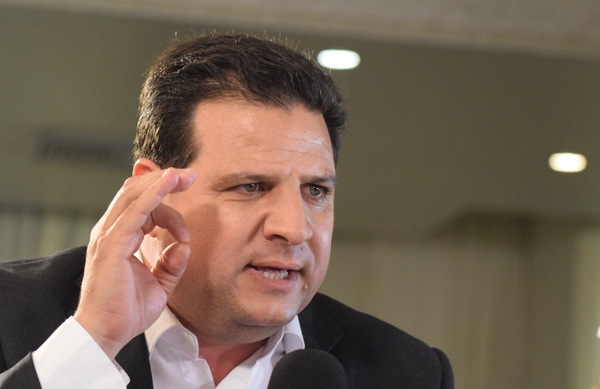 Rome, 22th of October 2016, Nena News – On October 9th, Prime Minister Benjamin Netanyahu announced that he plans to support his coalition’s initiative to boycott the Joint List, the third largest party in the Knesset. The move, initiated by Defense Minister Avigdor Lieberman, is aimed at punishing the party’s decision not to go to former President Shimon Peres’s funeral, which was attended by dignitaries from no less than 70 countries, including US President Barack Obama and Palestinian Authority President Mahmoud Abbas. “Members of the Joint List have proven that there’s no point anymore in discussing anything or even arguing with them,” Lieberman averred, while adding “that we must decide to boycott all their appearances and addresses in the Knesset.”

Speaking on Israeli Channel 2, the head of the Joint Arab List, Ayman Odeh, explained that Peres’s funeral was part of a “national day of mourning in which I have no place; not in the narrative, not in the symbols that exclude me, not in the stories of Peres as a man who built up Israel’s defenses.” He went on to recall scenes in Peres’ long public career: from his role in the military government imposed on Israel’s Palestinian citizens in 1948-1966, through his pivotal role in obtaining Israel’s nuclear arsenal, to the IDF’s 1996 attack on a UN compound in the Lebanese village Qana, where 106 civilians were killed. He even cited Peres’s failure to attend Arafat’s funeral (with whom he had won the Nobel Peace Prize), or, indeed, of any other Israeli-Arab leader.

Perhaps because he did not think the Israeli public could stomach it, Odeh did not mention that Peres was a colonist through and through. In documents recently revealed, Peres is quoted as saying that he does not believe in an “Arafat state” and that Jordan is the only Palestinian state, while bemoaning the existence of Palestinian citizens in the Galilei. “I see how they eat up the Galilei and my heart bleeds,” he told former Prime Minister Menachem Begin in a 1978 meeting between the two. Much more recently, Peres went so far as to maintain that “Israel Defense Force operations enabled economic prosperity in the West Bank, relieved southern Lebanese citizens from the terror of Hezbollah, and have enabled Gazans to have normal lives again.” Indeed, until his death he was the paradigmatic voice of the colonial civilizing mission.

During the same Channel 2 interview, however, Odeh did point out to his Israeli Jewish audience that the following Saturday the Arab-Israeli community would be marking the 16th anniversary of the October 2000 riots in which 13 citizens of the community were killed by police during a series of demonstrations protesting Israel actions against Palestinians at the outset of the Second Intifada. “Will anyone from the government attend?” Odeh pondered; “Can someone understand our pain or does our pain not interest anybody?”

Notwithstanding Odeh’s candid effort to expose Israel’s racist approach toward its Palestinian citizens, Netanyahu’s coalition is determined to boycott the Joint Arab List.

Ironically, this is the same coalition that has been outspoken against the adoption of the boycott strategy as a legitimate non-violent political tool to struggle against Israel’s subjugation of the Palestinian people. Indeed, Netanyahu’s government is currently spending millions and millions of dollars to combat the Palestinian boycott movement, while criminalizing anyone who dare to support it publically. Interior Minister Aryeh Deri and Public Security Minister Gilad Erdan announced the formation of a committee to prevent BDS activists from entering the country, and to deport those already in Israel/Palestine.

Boycotting Israel’s colonial project is anti-Semitic, Netanyahu and his cronies assert, as they boycott the Palestinian leaders who dared not pay final respect to Peres.  They are so captivated by their twisted logic, that the irony is lost on them.

Neve Gordon is the co-author (with Nicola Perugini) of the newly released The Human Right to Dominate.