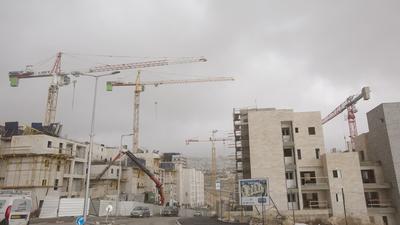 A December public opinion poll found that two-thirds of Palestinians believe a two-state solution is no longer feasible.

[...] In Al Birah, Ramallah’s twin city, the municipal soccer stadium sits on a ridge just a few hundred yards from the red-roofed homes of the Israeli settlement of Psagot on the opposite hilltop. Wasfi Nawajah, a coach in a warm-up suit, complained that his southern West Bank village had no permits to build a gym, while the neighboring Israeli settlement was free to build sports facilities and expand [....]

In recent years, demographers have projected that the total number of Palestinians in Israel, the West Bank and the Gaza Strip will eventually surpass that of the Jewish population. On Thursday, the Palestinian statistics bureau said demographic parity would be reached by the end of 2017 [....]

In a cafe full of water-pipe smoke across from Al Birah, Omar, a 40-year-old computer teacher, said his family lost several acres of agricultural land to the construction of Israel’s West Bank barrier. Omar traverses military checkpoints daily. For him, a single “undeclared state” already exists, he said.

“The two peoples live together. What is wrong with living on equal footing? This is the ideal situation,’’ he said. “People need to look after their future and their personal interests—national claims are not everything.”